Doug Durant, one of the Valley’s most beloved musical and theatrical performers, passed away in July, 2014. This page is meant to be a memorial to him. If you have stories, photographs or other memorabilia you could share, it would be gratefully appreciated.

Do not go gentle into that good night,
Old age should burn and rave at close of day;
Rage, rage against the dying of the light.

Though wise men at their end know dark is right,
Because their words had forked no lightning they
Do not go gentle into that good night.

Good men, the last wave by, crying how bright
Their frail deeds might have danced in a green bay,
Rage, rage against the dying of the light.

Wild men who caught and sang the sun in flight,
And learn, too late, they grieved it on its way,
Do not go gentle into that good night.

Grave men, near death, who see with blinding sight
Blind eyes could blaze like meteors and be gay,
Rage, rage against the dying of the light.

And you, my father, there on the sad height,
Curse, bless, me now with your fierce tears, I pray.
Do not go gentle into that good night.
Rage, rage against the dying of the light. — Dylan Thomas

For Doug’s obituary, go HERE
Donations are being accepted to offset medical expenses at HERE

Tim Briggs posted this on Facebook:
This morning, I found out that one of my personal heroes, Doug Durant, passed away. I’ve been thinking of all day of what I could possibly say that would convey the love and admiration I have for this man – and for his wife Laura Durant – and I realized that there really aren’t any that are truly adequate. I met Doug at one of the lowest points in my life, at a point I thought I would never be able to get out of. He supported me when I felt no one else did. He was one of the very first people I came out to. He wasn’t just my music teacher – he was also my confidante, letting me spill everything inside me at him even though he was fighting his own battles. He saw talent in me that I didn’t see in myself, and even when he was very ill he had words of compassion and encouragement to give to me, and I will never forget that. Over the past few years, I watched Doug fight a fight – physically, emotionally, and mentally – that I don’t know that I could have fought. I have never met anyone with such a passion for life, and such an amazing spirit. He taught me so much about what it really means to live every moment, and to enjoy your life to the fullest extent. I am not very good at following that, though I try to be. I know, for a fact, that without Doug’s influence and support, I would not have continued in music. I would quite literally not be where I am today if I didn’t have the honor of knowing him. I hate talking about people in the past tense, like the lack of physical presence means a lack of presence in our lives. It doesn’t. Doug was, is, and will always be one of the best people I have ever known, and the world is a smaller place today without that physical presence still in it – but it is also a bigger place for having had him as long as it did.

Doug photographed on his birthday by Laura 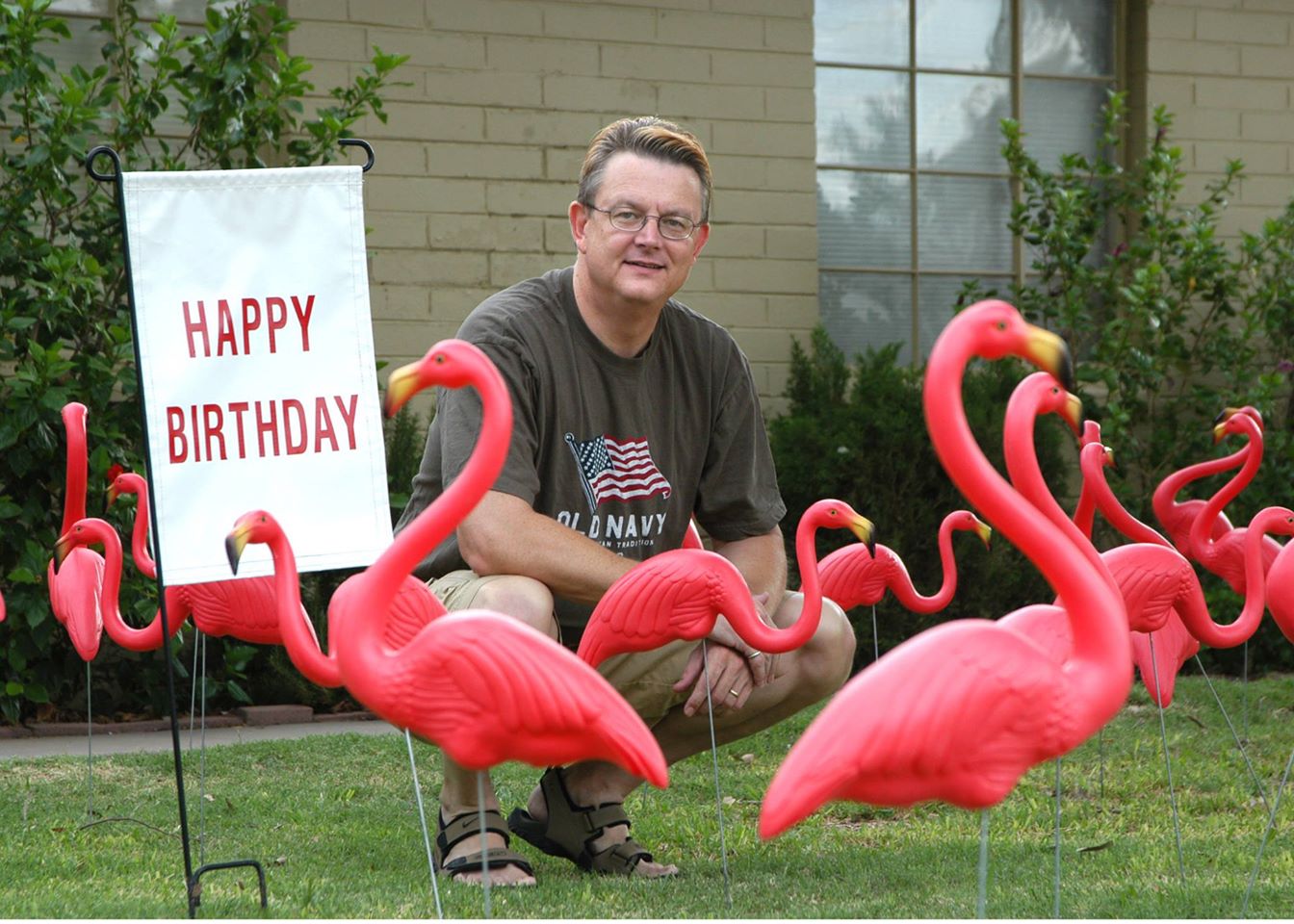 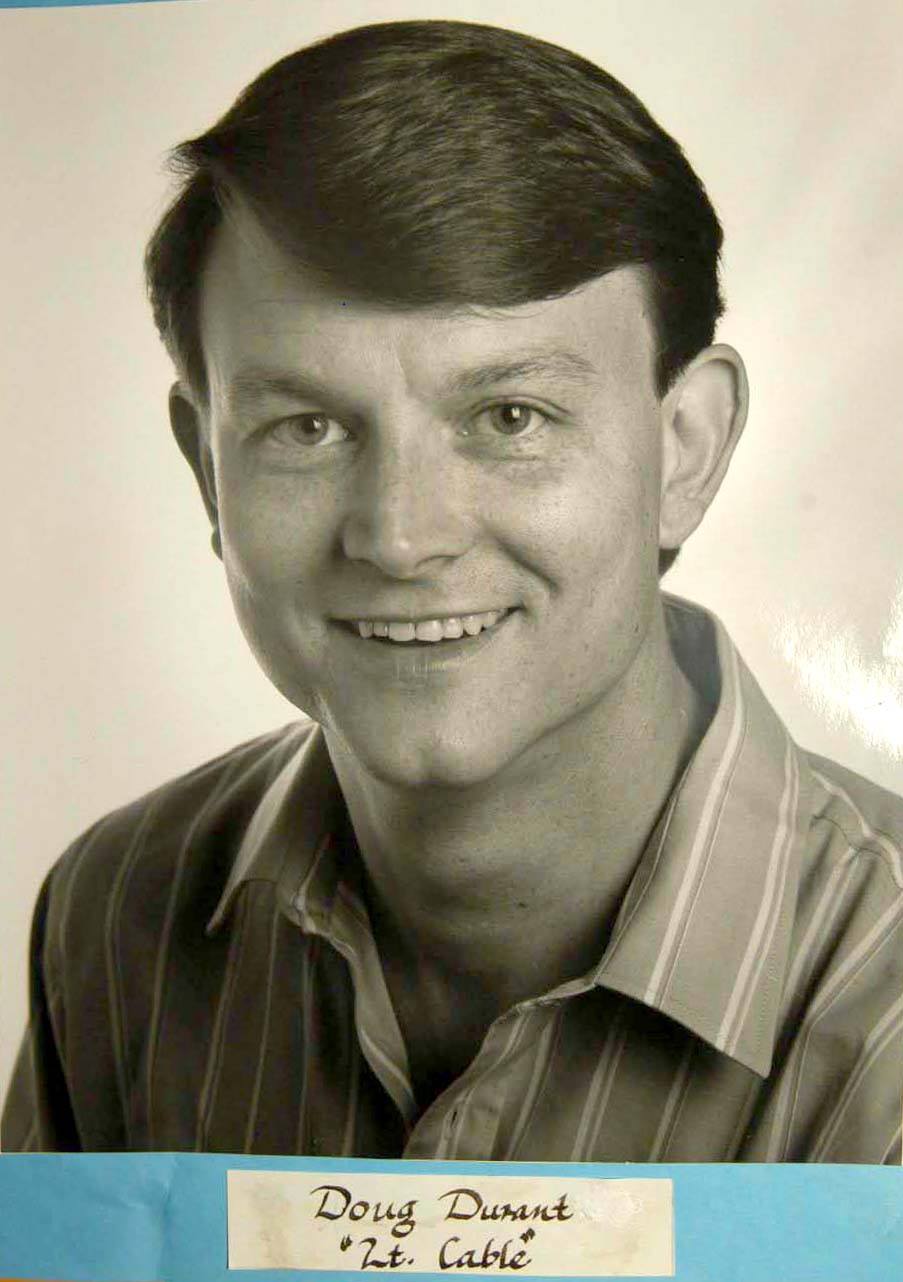 Lt. Cable in “South Pacific” at Theater Works – circa 1986. This this was the second show of their inaugural season. Pat Russell was Billis.

Our loved ones never leave us. They merely move ahead and wait for us to catch up – Kyle Lawson