In the late 1960s, one of the finest director/actors working in Phoenix was James Edmondson, who went on to become one of the giants in regional theater. Particularly well-remembered is his 1968 production of The House of Bernada Alba at Phoenix Theatre. (Yes, as I can’t repeat enough, most of the great theater classics have been produced at our oldest theater!)

James’ career has largely been devoted to the Oregon Shakespeare Festival, where in 38 seasons, he has directed 33 productions including The Diary of Anne Frank, The Tragical History of Doctor Faustus, King Lear, Wild Oats, Titus Andronicus and Fuddy Meers.

As an actor there, he has performed more than 100 roles including the King of France in All’s Well That Ends Well, Lear in King Lear, John in King John, Willy Loman in Death of a Salesman, George in Of Mice and Men, Mephostophilis in The Tragical History of Doctor Faustus, Angelo in Measure for Measure, Shylock in The Merchant of Venice, Joe in The Time of Your Life, Captain in Dance of Death and Richard in Richard II.

JANUARY 1969. “Bad Children.” Jim designed the sets for this production. 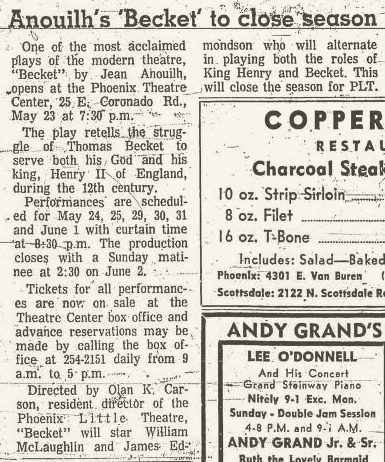