Read more about Nick at www.nickcartell.com

When I first began to notice Nick Cartell, I thought how lucky we were to find a genuine juvenile.

You may think I’m insulting Nick. I’m not. In the days of yore, a juvenile was a respected member of the company. He was generally handsome, possessed of considerable skills and relegated to playing the secondary roles.  He was the best friend, the guest at the party, the heroine’s ex-, present or future romance. True, he seldom got the girl at the end, but the play wouldn’t have gone forward without him.

He was, in short, the male equivalent of the ingenue, and where would we be without the ingenues of our theatrical world?

It was virtual typecasting in Nick’s case, though, in truth, he played as many primary roles as secondary ones. He was in the words of one critic, “devastatingly handsome,” he wore tuxedos and tennis whites with aplomb and he boasted a superb tenor voice. He was an accomplished actor and local troupes, most particularly Phoenix Theater, made ample use of him.

It is no surprise that, today, Nick plies his trade on Broadway (Jesus Christ Superstar, Scandalous), off-Broadway (Frankenstein, Tess), national tours (The Phantom of the Opera) and regional theater (My Fair Lady).

He is just too good to keep down on the oasis.

I’m going to turn this over to Lynn Trimble, author of the excellent Stage Mom and Art Musings blogs. She did one of the finest interviews with Nick that I’ve read. It was published on March 19, 2012 just before he opened on Broadway in Jesus Christ Superstar.

Hometown boy Nick Cartell,  a swing for the Broadway production of Jesus Christ Superstar,  opening this week at the Neil Simon Theatre in New York City, moved from Michigan to Phoenix at just six months old — where he lived until completing a BA in theater performance at Arizona State University in Tempe.

Cartell was a member of the Phoenix Boys Choir from third through fifth grade, and describes the experience as “the beginning of my training.” Back then, he was a boy soprano. Today he’s a high tenor, and one of several actors prepared to take over should a male cast member be unable to perform for some reason.

Between boys choir and Broadway, there were performances with several local theater companies. Cartell’s last show with Valley Youth Theatre(West Side Story) overlapped with his first show with Phoenix Theatre (Man of La Mancha), so the transition from youth to adult theater felt seamless.

But it was three years performing with Disney in Tokyo that made the leap to Broadway feel natural. “If I can make it in Tokyo,” thought Cartell, “I can do a big city like New York.” Before landing the Broadway gig, he did several Off-Broadway productions.

We assume too often that someone who can sing, dance and act will nail every audition. Or think that being a great performer is enough. Not so, says Cartell. Auditioning is a skill, just like acting, that has to be honed.

“I wish more schools would teach it,” reflects Cartell — who also shares that New York is full of folks who can sing, act and dance. Making it requires something more — like hard work, preparation, ongoing training and a desire to improve at every juncture.

Teens interested in musical theater careers should get all the voice, dance and acting training they can, says Cartell, who notes that plenty of community-based options exist for those who can’t afford one-on-one vocal coaching and such. “Keep learning and working to get better,” urges Cartell. Sitting too pretty in pride over past accomplishments won’t set you apart in settings like Broadway that are filled with talented folk.

For some, it’s tough to balance training/performing demands with schoolwork and other responsibilities. But Cartell says he rarely struggled with such things. He knew what he wanted and he worked like the dickens to get it all done. Meeting and shaking hands with one of his musical theater idols, Andrew Lloyd Webber (composer for Jesus Christ Superstar), was one of many moments when it all paid off.

Cartell heard last October that the Stratford Shakespeare Festival production of Jesus Christ Superstar would be heading to Broadway, and spotted the Actors Equity audition posting in late December. Auditions began one January day at 9:30 am, and several hundred people showed up. Cartell arrived at 7 am, and ended up being the first to audition that day — singing  Journey’s Open Arms for musical director Rick Fox and the casting director.

A series of callbacks followed, each requiring that Cartell learn and perform more material. As I interviewed Cartell in a diner near the Neil Simon Theatre, he gleefully recounted each step in the process — recalling, along with wife Christie Bettes Cartell, the exact date and time of each. Dance callback — Jan. 30 at 3 pm. Final callback — Jan. 31 at 1 pm — before director Des McAnuff, choreographer Lisa Shriver and two others.

Cartell recalls choosing an order for the songs he’d been asked to prepare in case he was told to just run with it. Instead, they asked first for the most difficult piece — Gethsemane. Cartell felt afterwards that he’d given the best audition of his life. There was nothing more he could do. It was in the show’s hands. By 3 pm the call came in. He was chosen for the role of swing.  A formal offer followed on Feb. 1, and he began rehearsing Feb. 9 for his first preview on March 9.

Cartell admits that it all feels a bit “surreal” at this point, adding that he’s “so proud to be part of this show.” Cartell notes that the Jesus Christ Superstar story is appealing “regardless of what you believe” — suggesting that most are familiar with the story, and empathize with the challenges faced by Jesus the man.

Jesus Christ Superstar focuses on the last seven days of Jesus’ life, so key players include Judas, Mary Magdalene, Pontius Pilate, King Herod and others. But there’s something new in this production, according to Cartell, who says there’s a bit of a love triangle vibe between Jesus, Judas and Mary Magdalene. Seems there’s magnetism between both men and Mary, and perhaps both men as well.

When I asked Cartell to share audition tips with young actors back home, he first recounted a piece of advice received as an 18-year-old fresh out of high school — Listen to soundtracks. “Sing along,” Cartell suggests, “but find your own voice with it.”  The advice, by the way, came from Matt Bogart– then performing the role of Chris in Miss Saigon, and now performing the role of Nick across the street from Cartell in Jersey Boys at the August Wilson Theatre.

Sometimes the gig goes not to the best performer in the room, but to the one with the most passion. “If you connect with what you are singing, even if you are not the best singer, they will go on that journey with you.” Auditions start before you ever begin to sing, says Cartell. It’s also about how you handle yourself in the room — and even the hallway where you’re waiting to be called. “You never know,” shares Christie, “who the monitor is.”

Have your music cut correctly, adds Cartell. You may only get 8 or 16 bars, so prepare your music accordingly. Nobody wants to fuss over your music at the piano. Stay in shape, recommends Cartell, because musical theater requires plenty of stamina. “Get into dance, acting classes — anything and everything.” Do voice lessons, too, if you can swing it financially. Time spent learning tap, jazz, ballet and theater makes you more marketable, says Cartell. At the end of the day, adds Cartell, it’s a business. 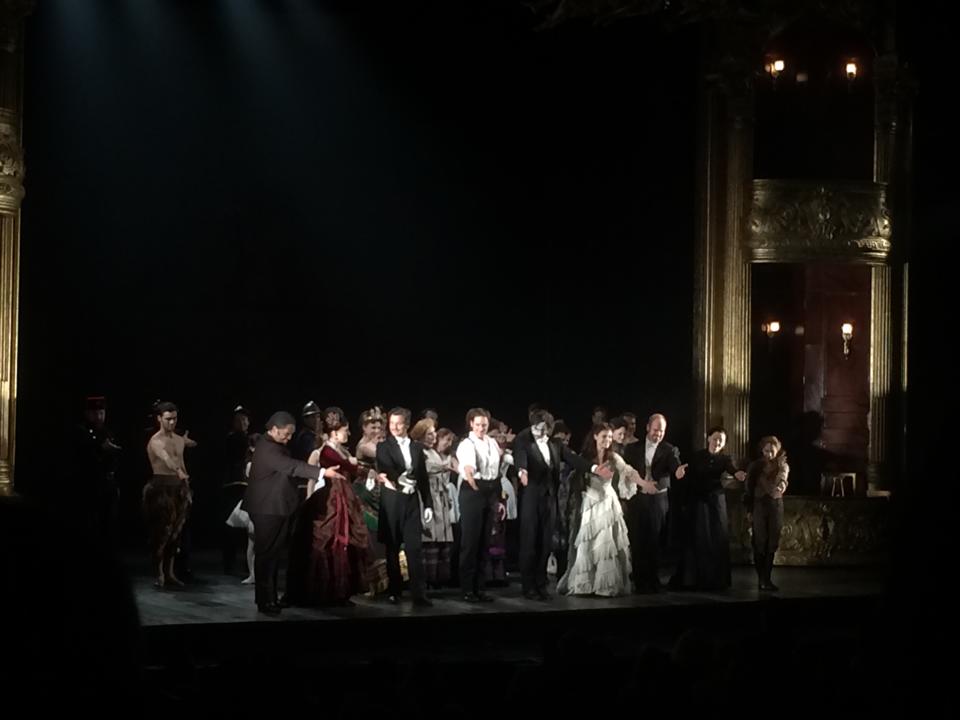 In this photo of the cast of “The Phantom of the Opera” taking its bows is our own Nick Cartell, who is playing Raoul. Don’t know about you but the thought of hearing Nick sing “All I Ask of You” sends shivers up the spine. Photo by Katherine Paige.
Nick Cartell Broadway opening night after party for ‘Jesus Christ Superstar’, held at the Hilton Hotel. New York City, USA
Read more: Picture – Nick Cartell http://www.contactmusic.com/photo/nick-cartell-broadway-opening-night-after-party-for-jesus-christ_3794555?track=cp