A CRITIC REMINISCES – OR, RATHER, WISHES HE COULD

You know when retirement becomes hard? When you see the world changing and you have no part in it.

Toby Yatso’s career developed into the high-powered thing it is today after I laid down my critic’s pen. I never had the chance to lavish praise, offer uncle-ly advice or otherwise comment. It has been hard to sit at my computer and watch others chronicle the upward rise of this young performer.

But I have read the reviews, the articles, the Facebook posts by friends and co-workers. I have no doubt that we are talking gifted here, very gifted.

I get a kick of seeing him in photographs. I married into a family of giants (two nephews top out at 6’7″). I have no idea of how tall Toby is. I can only say that, like my nephews, he breathes a different atmosphere.

That hasn’t kept him from turning into the Valley’s hottest young leading man in the 2000s. He works everywhere – from the alternative theaters to the mainstream stages. Whether it’s as one of the puppeteers in Avenue Q (which he’s done twice, both to critical acclaim) or one of the strippers in The Full Monty or Ash in Evil Dead: The Musical (the photos from that are such a hoot!), he has the critics and audiences wrapped around his lanky frame.

And he sings, too!

I do envy them the opportunity to sit in a darkened theater and watch this man work his magic.

Toby, who began working here in 2006, is a member of the Megaw Actor’s Studio, director/instructor for PT’s Musical Theatre Intensive program, and he is on the musical theatre faculty of ASU’s Lyric Opera Theatre.

“What I like about Toby is that he’s never satisfied with just bringing the same-old same-old. And he’s just awesome to work with – I laugh hysterically. That’s one of my big things in rehearsal: if we’re not laughing, we’re going home, ‘cause life’s too short. We’re not curing cancer here, people – we’re doing a musical revue.

“At the end of the day, if you’re in a revue, yeah – sing pretty, but you’ve got to be funny. It can’t all be about the voice, because I can get a CD and sit at home in my PJs and have a cocktail. So I want people who can be interesting to watch, and move you to feel something … lift the music off the page.”

This revival marks the second time Toby has portrayed Princeton/Rod in the raunchy puppet musical for the company. He was too good in the part for it to be recast.

Forty-two Gershwin song numbers, almost as many costume changes for the cast. If you’re going to do a musical revue, this is the way. By my count, there are three musical geniuses in town: Michael Barnard, David Ira Goldstein and Robert Kolby Harper. Back when Robert  was primarily an actor, who knew? It was PT and Barnard that exposed the Valley to the gifted director-choreographer that lived inside. But what is a director without a cast? Toby Yatso, Jenny Hintz, Jen Taber, Kaitlynn Kleinman Bluth, Kyle Erickson Hewitt. Let me coin a comment: OMG!!

The New York Times described this one thusly: “A cross between Who’s Afraid of Virginia Woolf? and an uncensored episode of Survivor, the play Hunter Gatherers depicts four friends whose civilized anniversary gathering rapidly turns into a session of devolution.” From that description alone, it was a perfect play to be directed by Ron May, co-founder of the alternative Stray Cat Theatre. Toby, Angelica Howland, Yolanda London and Cale Epps were excellent as the couples.

In recent years, Phoenix Theatre has produced a number of new works. This annual festival is evidence of its commitment.

If you grooved on Monty Python, then this was the musical made in heaven just for you. Silliness taken to the nth degree and performed so far over the top that the cast (including Toby’s daffy Lancelot) seemed to be living in the Kuiper Belt. Spot-on direction by Michael Barnard, one of the town’s musical geniuses, and the classy musical direction we’ve come to expect from Alan Ruch. Add Robert Kolby Harper’s choreography, Tim Hatley’s deliciously motley costumes and Mike Eddy’s lighting and you have what Camelot should have been but never was.

This unusual musical, which debuted off-Broadway in 2001, depicts the journey of a young woman just released from prison who decides to start her life anew in a rural Wisconsin town. Toby played the local sheriff.

Yes, it’s based on the movie. Yes, it’s a musical. Yes, the zombies dance. ‘Nuff said. (At least Toby got to show off his admirable physique – or what was left of it by the end of the show.) 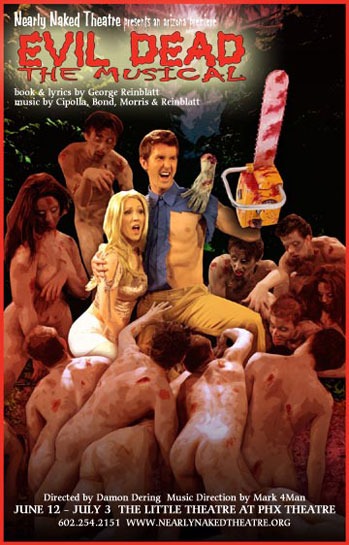 This wacky, wonderful spoof of Broadway’s sacred cows is probably best summed up in this quote from an interview Toby gave to Joseph Gordon of the Gilbert Theater Examiner:

(Referring to his devasting mimicry of Harvey Fierstein playing Edna in Hairspray)  “In heels and a really pouffy wig, I was probably 7′ 4″ by the time you got to the top of my hair.”