I have always thought there was something special about Maria Amarocho. I never quite placed it to my satisfaction. Then I saw several photographs taken of her by John Groseclose. I saw Good People at Actors Theatre.

They say the eyes are the window to the soul. The photographs brought Maria’s eyes into focus, opening a new way to look at her as an actress. The play sharpened my observations.

It struck me that she has beautiful eyes.  I know. That fact is often mentioned in descriptions of her. They are the sort you find in the paintings of John Singer Sargent, where the artist, unsatisfied with the effect he has created, adds a dab of white to the iris. The eyes flash from the canvas.

Maria’s eye flash from the stage in  just that way, making the journey to the far reaches of the auditorium and telling tales as they go.

Of course, that is superficial reflection on my part. What gives Maria’s eyes value in any assessment of her as an actress is not how they look but what they reveal. Give her a script and, in short order, the eyes of her assigned character are peering out at you. The pain, the happiness, the fear, the contentment, the insecurity of the woman she is portraying  come pouring forth. Her expression is worth at least a thousand pages of dialogue.

How she does that is a mystery to be witnessed, not explained on the page.

This is where the play adds its part to the story. Recalling the photographs, I was watching her eyes. I became aware she was not only revealing her character, she was intently seeking out that of her fellow actor.

She was listening. You don’t know rare that is in theater. Yes, actors look at each other, but often what you see reflected is their concern with their next line. Maria seems focused entirely on what is being said, at the moment it is being said. When, as in Good People, she is paired with people who also listen – Katie McFadzen, Cathy Dresbach – sparks fly.

Over the years, I have seen many of Maria’s performances. It would be easier to list the types I didn’t see her play than the ones she did.  I’m sure I never saw her turn into a spider, a mermaid or a gravity-defying witch, though I’m equally sure she could  do it if she wanted.

I did see her as a British woman who adopted a Jewish child from Nazi Germany. That was in Kindertransport at Arizona Jewish Theatre Company. What words come to mind? Compassion, fear, frustration, love. A feast for the eyes, if you will.

I was very taken with her Rosemary, the old-maid school teacher, in Picnic. Rosalind Russell made a caricature of the part in the movie. Maria found the pathos behind the bluster; she was appealing even as she made a fool of herself over a younger man.

Just before I retired, I caught her and Gene Ganssle in a play at the Arizona Biltmore about two people failing to connect because of religion. I can’t remember its name, Hard Love, something like that. Maria was excellent in a part that required her to exhibit every possible emotion felt by a woman caught between an impossible place and the world.

Then there were her multiple characters in Nickel & Dimed (at least I seem to remember multiple Marias), her scene-stealing Golde in Fiddler on the Roof, her splendid turn in Working and her pop music queen in Beehive.

And, of course, Good People, in which she played a down-to-earth resident of South Boston, hugging one character, rolling those expressive eyes at the antics of another, filling a supportive role with so many nuances you felt as though you lived next door to the woman, even if the closest you had ever gotten to South Boston was Chicago.

Whatever the role, Maria Amorocho makes it her own, subjugating her identity to bring you into the world of the play. For an hour or two, everything outside the theater ceases to exist. You might not want to stay in her world, it is perhaps a world you would never choose to visit, but one look into those eyes and you can’t turn away.

They have opened the door. There is no way but through. 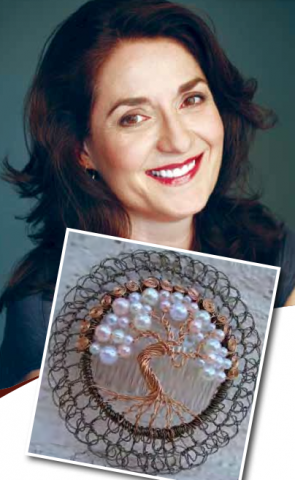 Valley theatergoers are very familiar with the multi-talented Maria Amorocho. For over 20 years, she has appeared on nearly every stage in the area in comedies, dramas and musicals.

“I can’t say I’m exactly a triple threat,” she admits with a grin. “I’m known as ‘an actor who moves’ rather than a true dancer.” No matter. With her rich, clear soprano voice and her significant “acting chops,” she’s a shining star in each production she graces.

Maria is a product of a Baptist missionary nurse and a Catholic Colombian doctor. That fact, in and of itself, might just make her unique.

“My parents were married in 1959. My mother came from Eastern Kentucky; marrying a Catholic Latino was unheard of !”

Maria grew up in Louisville where she attended church and Sunday school. But the place for social fun was the Jewish Community Center.

“My family belonged and we were always at the pool. My friends were all there. I took cooking classes, learning to make kosher pizza and hamantaschen. My sister took pottery and crafts classes and would come home with Purim masks and seder plates.”

During and after college at Kenyon College in Ohio, Maria also did some shows at the Cleveland Jewish Community Center. By that time, her church attendance had tapered off, though she would sing at church events to “make my car payment.”

Maria had visited Arizona and saw it as a place of great potential for theater. “It was ground floor time. The theater arts were growing. It was an exciting place to be.” She needed a place to stay and friends recommended she contact Earl Weisbrod, who needed a roommate. She did and they were engaged three years later!

Earl was a dentist and a cultural, secular Jew. After the births of their two sons, Elijah and Jeremiah, Earl realized he wanted the boys to have a Jewish education. With Maria’s spiritual and social background, she readily agreed. The boys were enrolled at Temple Beth Israel’s preschool (now Congregation Beth Israel), and Maria drank in the education along with her sons. The more she learned, the more she realized how her own views fit in perfectly with Jewish values. Prior to Elijah becoming a bar mitzvah in 2007 at Temple Kol Ami, Maria converted to Judaism.

“I have always believed in tikkun olam (repairing the world), and I found the rituals and emphasis on home and family to be very comforting,” she says. “I believe that the Jewish people are ‘chosen’ not for privilege, but for responsibility, and that’s how I live my life.”

PLAYWRIGHT MICHAEL GRADY GETS A SURPRISE

For Kerry Lengel’s interview with Maria about this play, go HERE