The subject was theater. What a hard life it was, how exciting it was, how necessary to existence. It was one of those moments that made me realize that I had it good. I was writing for a newspaper about something that meant a lot to me. Yes, I had it really good.

There were many such moments at Mill Avenue Theatre. The child of Ben, Bruce Miles and Candace St. Jacques Miles, Mill Avenue was a bold experiment in creating popular theater that provided something other than reruns of Annie and Neil Simon. Obscure comedies, British plays, musicals like The Rocky Horror Picture Show that weren’t getting produced elsewhere. The fare was always one step above.

That’s a pun. Intended, too. I will always think of Mill Avenue and climb in the same sentence. You climbed the stairs from the modest entrance on Tempe’s Mill Avenue to the loft that housed the theater. Then, you climbed the bleacher-like pods to find your seat. Then you reversed the trek after the final applause faded away.

Then, again, there was Tomfoolery. It was the first production in the Valley of Tom Lehrer’s work. It ran for nearly a year. It etched Gene Ganssle on my memory (but that’s another story). I can’t say enough about this show. It was daring. It was delightful. It was just another day at the summit (I can’t seem to get over that “climbing” metaphor).

There also was Guv: The Musical. It ran for 21 months. A very long time in Phoenix terms. It was a spoof on Arizona politics just when we needed it. We were dealing with Ev Mecham. You think living with Jan Brewer is challenging. You should have been there with Ev.

We were there with Guv. For one thing, Dick Jonas was a dead-ringer for Ev. Eerie. Scary, too. And there was Terey Summer’s Rose Mofford, who replaced Ev at the statehouse. A comic masterpiece. (For Rose’s reaction, read my article below.)

Unfortunately, economics and other pressures were too much to bear for Mill Avenue’s triumvirate. The theater closed, but it lives on in the memories of those who made the climb.

When Rose Mofford heard what they were saying about her in GUV: The Musical, she reportedly burst into tears.

When Ev Mecham received an invitation to attend the satirical comedy, he reportedly ripped it into small pieces.

When Sheriff Joe Arpaio got wind of a certain segment in the sequel that involved him and a prisoner in pink underwear, he reportedly . . . Well, there were no reports of what he did. For the first time in history, the sheriff didn’t call a press conference.

Whatever else you might say about the GUV satires, they struck a nerve.

There have been two: GUV: The Musical in 1991 and GUV: The Emperor Strikes Back in 1996. A third – GUV TV – is about to open in Scottsdale. Like its predecessors, the latest compilation of low blows in high places promises to be an equal-opportunity jibe-r.

OK, mostly equal. Republicans do seem to be favorite targets. Ex-Gov. Fife Symington, Sen. John McCain and the Republican now-I’m-running, now-I’m-not candidates for Democrat Janet Napolitano’s office at the statehouse take the spotlight. But don’t worry, the show doesn’t call Napolitano “Gov. No” because it’s unwilling to take pot shots at her. Billboards, anyone?

When GUV: The Musical made its debut at Tempe’s now defunct Mill Avenue Theatre, it marked the end of a long drought in political satires. By and large, the Valley’s theater community was happy to concentrate on singing nuns and fiddling milkmen on the roof. Not since the heyday of Ajo Repertory Company in the late ’70s and early ’80s had local politicos had their idiocies paraded on the stage.

Audiences flocked to see what they’d been missing. GUV: The Musical ran for 21 months, making a bundle for all concerned. GUV: The Emperor Strikes Back wasn’t quite that successful, maybe because Fife Symington wasn’t as easy to spoof as Ev Mecham, but it had its fans.

Ben Tyler, who co-wrote the first GUV with Candice Miles and directed the second, is back on board for the third, this time as co-writer with Philip Taylor and as one of the actors.

“Don’t expect a repeat,” he says. “Political humor has the shelf life of sushi. Ev Mecham is a faded memory. There’s a lot of people out there who’ve never heard of him.”

What audiences will get with GUV TV is a satire within a satire. Tyler and Taylor have set their barbs in the context of “a day at a television station.” Segments follow the format of sit-coms, newscasts, cooking shows, game shows and commercials. The only thing GUV TV has in common with its predecessors is that (a) state politics are still a joke and (b) nothing is funnier than watching an Arizona governor trying to dance (literally) around the issue.

Among the juicier-sounding routines is a game show based on a popular Mexican example. The Big Saturday becomes The Big Border as Mexico’s president, Vicente Fox, hosts a group of contestants vying for a phony driver’s license, fake Social Security Card and minimum-wage job in Arizona.

Then, there’s Cooking With Fife, in which ex-governor turned chef Symington makes mincemeat of Emeril and Julia Child, and Everybody Loves Raynerd, a sitcom about a polygamous family in Colorado City.

Newscasts will catch the audience up with the latest activities of Gov. No and Sen. John (“I’m running for president, but I’m not announcing it”) McCain. Justice Sandra Day O’Connor shows up at the studio to judge Arizona Idol, a show in which state politicians do their best to appear talented.

“I admit it was a lot easier to write a show about Ev Mecham,” Tyler says. “He was a quote a day. But if you read the papers, you know that it’s still crazy out there. We haven’t lacked for inspiration. We ended up cutting 40 pages out of the first draft because there wasn’t time to include it all.”

“We’re fortunate to have people who know how to get laughs,” the director says. “One of the reasons we’re doing GUV TV is that we think it’s time people lightened up about politics. My God, if you listen to some of the talk shows . . . ”

“We’ve been laughing a lot during rehearsals,” Tyler says. “I hope that’s a good sign.” 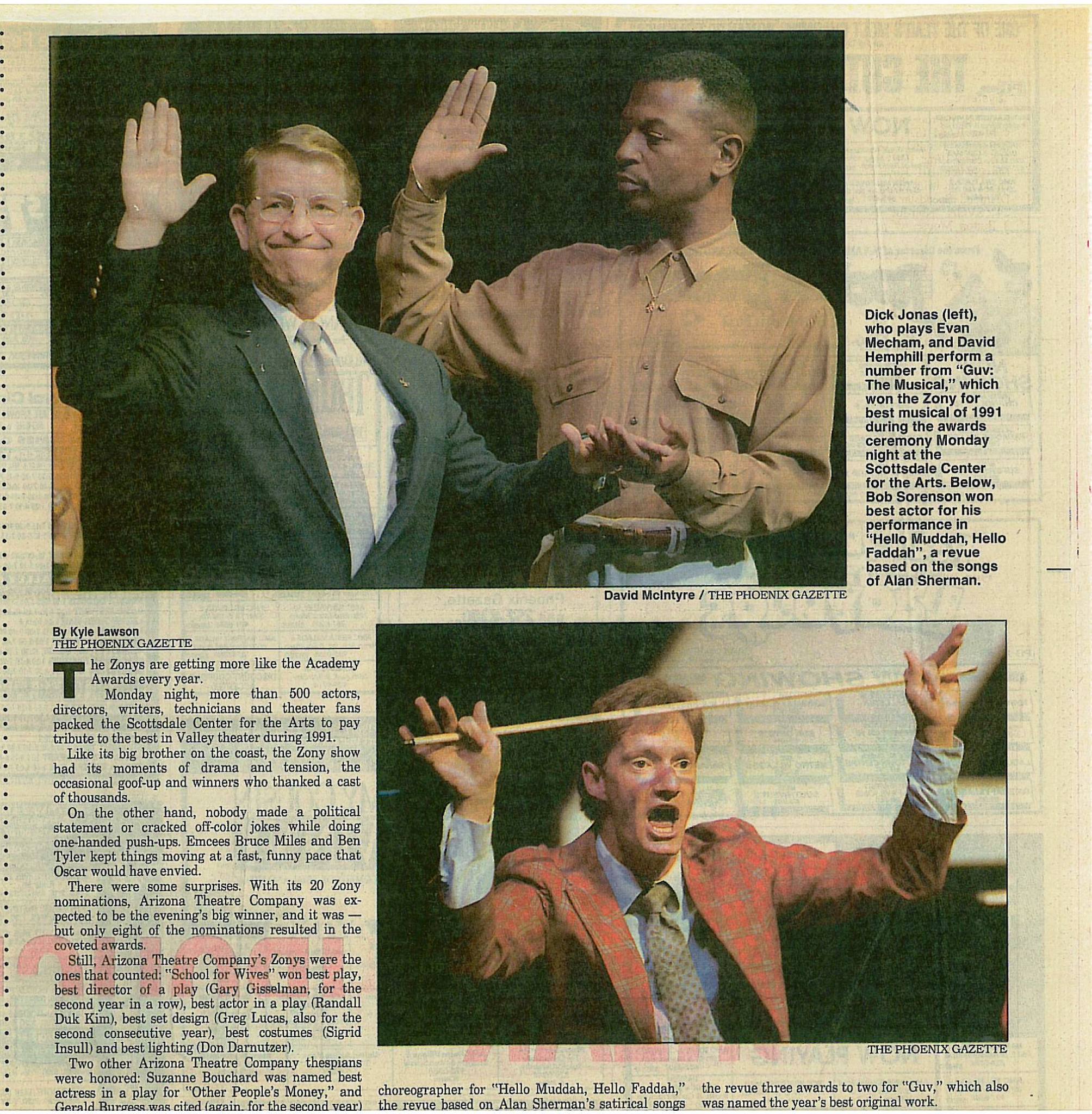