From time to time, the Symphony presents concerts revolving around the theater. 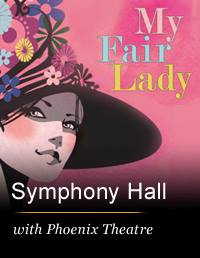 “Collaboration” is a buzzword in the arts that really boils down to math:

Divide the expenses, multiply the audience.

It’s been a successful formula for the Phoenix Symphony and Phoenix Theatre, which first teamed up in 2010 with a concert performance of “The Music Man” at Symphony Hall. The pairing has become an annual tradition with a Rodgers and Hammerstein revue in 2012, “South Pacific” in 2013 and now “My Fair Lady.”

“We know a lot of our subscribers love to go see us at the symphony, because they don’t often get the opportunity to hear 56 pieces playing a Broadway score,” he says. “Even on Broadway you don’t hear a 56-piece orchestra. And ‘My Fair Lady’ will be a lovely score to hear because it’s such an iconic piece.”

Based on George Bernard Shaw’s 1912 play “Pygmalion,” “My Fair Lady” was a Broadway smash in 1956 with Julie Andrews starring as Eliza Doolittle, a Cockney flower girl who, under the gruff tutelage of phonetics professor Henry Higgins, transforms herself into the perfect picture of posh. With music by Frederick Loewe and lyrics by Alan Jay Lerner, favorite songs include “The Rain in Spain,” “Wouldn’t It Be Loverly?” and “I Could Have Danced All Night.”

Phoenix Theatre’s performance will be fully staged, but with more minimal movement and scenery than usual, in order to equally highlight the orchestra.

“We’re on the apron of the stage, so the choreography has to be more right to left as opposed to deep, and I have to play longer angles because it’s such a wide stage,” Barnard says.

Starring as Eliza Doolittle is soprano Jeannie Shubitz, who first played the role at Arizona Broadway Theatre in 2011. One of the Valley’s most sought-after musical-theater performers, Shubitz relocated to New York two years ago but comes home regularly.

In last year’s “South Pacific” collaboration at Symphony Hall, she played “cockeyed optimist” Nellie Forbush and made a big impression on guest conductor Ted Sperling, who had served as arranger for the same musical’s 2008 revival on Broadway.

“She’s a very flexible singer,” says Sperling, who is returning to Phoenix to conduct “My Fair Lady.” “She can sing low and high with equal fluency, and she sings the way she speaks. It just comes out very naturally.

“I was so pleased with how great an actress she is, not just a singer. She seems very versatile to me because she really approaches things from an acting standpoint first.”

For her part, Shubitz agrees with “My Fair Lady’s” oft-used moniker of “the perfect musical.”

“The characters are multidimensional, so as an actor you get to dig as deep as your time will allow,” she says.

The addition of a full orchestra makes this performance all the more special, she adds.

“It is a truly spectacular thing to get to sing with an entire orchestra behind you,” she says. “There is nothing like the feeling of that vibrating and ringing through your body.”