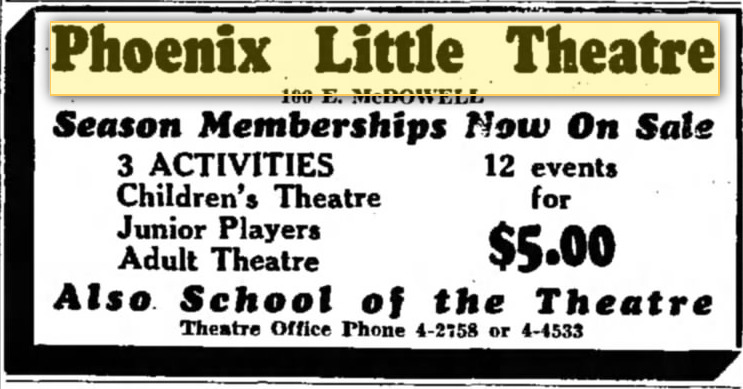 This page contains items pertaining to Phoenix Theatre in the 1930s. For a general history of the company go to the main page.

Phoenix began the ’30s with a population of 48,118. The number of telephones increased to more than 15,600. NBC became the first national network to air in the Valley in 1930, broadcasting from KTAR’s tower atop the Westward Ho Hotel. In a hallmark of advancing civilization, Holsum Bakery began selling sliced white bread in 1931. American Airlines started flying between Phoenix and Tucson in 1932. Work began on Encanto Park in 1934 and, a year later, the city purchased Sky Harbor Airport. In 1934, the city was rocked by its first major civic scandal: Mayor F.J. Paddock was sent to prison for three years after being found guilty of income tax evasion. Joseph S. Jenckes, whose family was active at Phoenix Little Theatre, became mayor.

You may take children’s theater for granted but it wasn’t always so. Although there were activities for youngsters that involved theater in one form or another, it wasn’t until Dorothy Seifert Dodge began a series of programs designed especially for youth at Phoenix Little Theatre in the early 1930s that the concept took root.

Called the Curtain Pullers, the group produced family friendly fare such as Cinderella and Snow White and the Seven Dwarfs.

Olga Rogers began a program called the Phoenix Junior Players for high school and junior college students. The group performed and rehearsed at PLT and made its debut in January, 1935.

PLT also facilitated the theatrical interests of adults with classes in diction, makeup, stage technique and contemporary drama led by Mrs. Dodge, Mrs. Wayland Brown and Walter Ben Hare. These sessions were so popular that often potential students had to be turned away.

During the ’30s, Phoenix Little Theatre presented other little theaters’ productions at the Old Coach House, including those by Mesa Little Theatre.

Stephen C. Shadegg, former director of the Laguna Beach Theatre in California, begins his long association with PLT as guest director of One Hundred Years Old during the 1932-’33 season.

The membership was exposed to a wide variety of readings and one-act plays throughout the 1930s. Membership meetings, held at the theater or in homes of members, featured entertainment programs of one-acts directed and acted by PLT members.

Often this was an opportunity for fledgling directors to test their skills and to prove themselves before being awarded a directorial assignment as a part of the theater’s season.

These programs were an effective way of recruiting new members, as these special performances were open only to active members.

In the late 1930s, Phoenix Little Theatre had a Sunday program on KOY Radio called Phoenix Little Theatre of the Air. It was a mishmash of material that promoted upcoming or current plays and presented PLT actors in selected scenes. Each segment was approximately 15 minutes. Jeanne Paquette and Jack Wages made frequent appearances.

BOUND FOR GLORY – WITH A SLIGHT DETOUR

In the 1930s, a young Kingman actor took to the stage at PLT. When I first came to the Valley in the late 1970s, old-timers still remembered Andy Devine.

“I think the thing that stood out most about Andy was his voice,” David Berge told me in a 1977 interview. “It sounded like you were scraping the bottom of a barrel. The directors didn’t know what to do with him. But he was such a likeable kid that one of them finally gave him a part. I think he had two or three lines. The problem was, he was so scared he couldn’t remember them on opening night. He went up. That scared him even worse. He ran off stage – only where he thought there was a door, there was a window. He went right through it. Everyone gave him hell – in a funning way – after that. It wasn’t long before he went off to Hollywood.”

Andy had much better luck at the studios. He soon was being cast (or miscast as in 1936’s Romeo and Juliet as one of Juliet’s servants) in big productions like In Old Chicago and A Star Is Born. In 1939, he was back in his home state in one of his most memorable roles, the driver in John Ford’s classic western, Stagecoach. — Kyle Lawson. 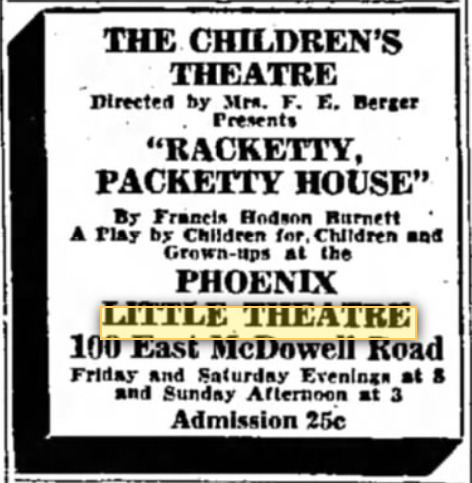