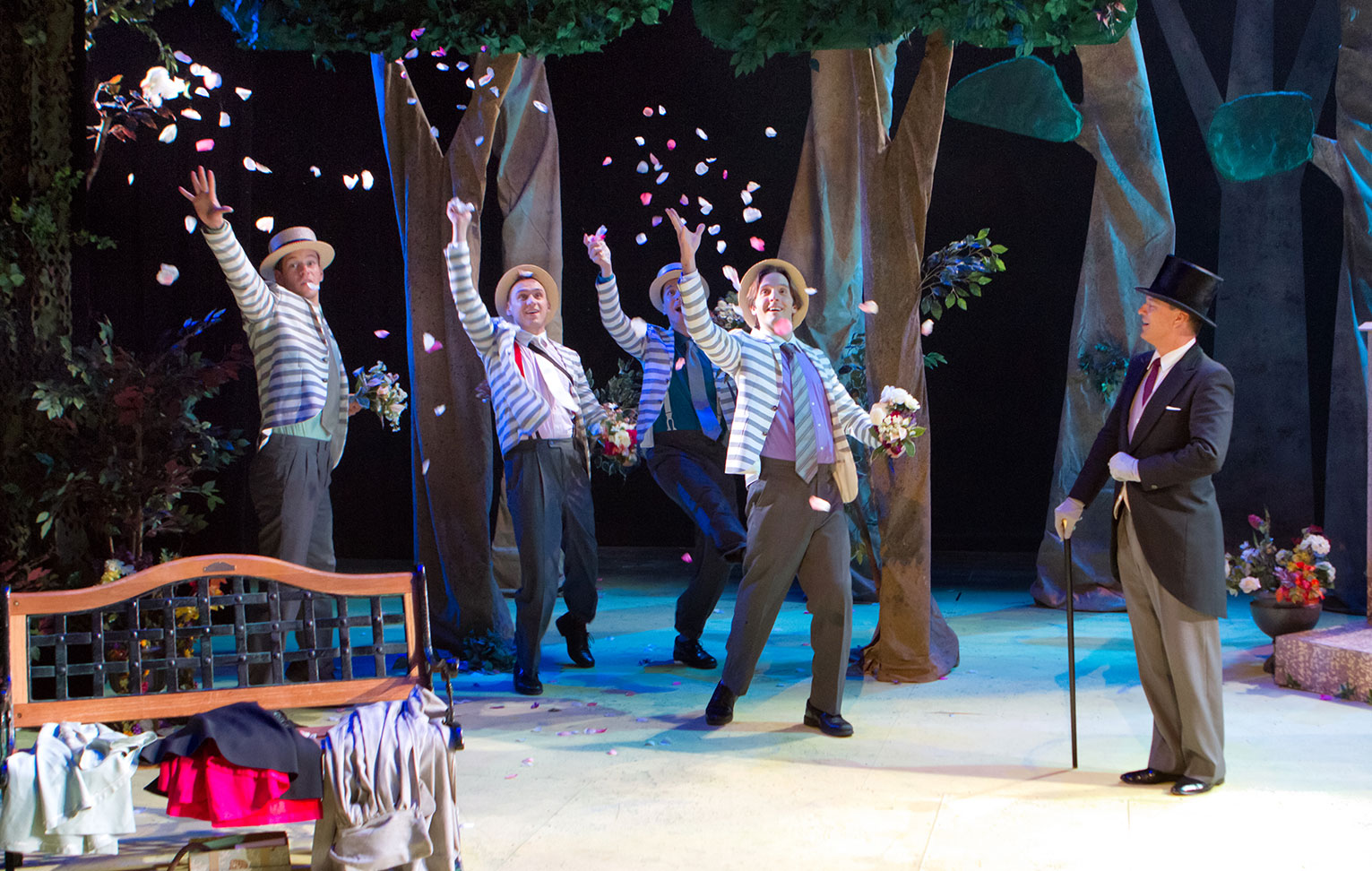 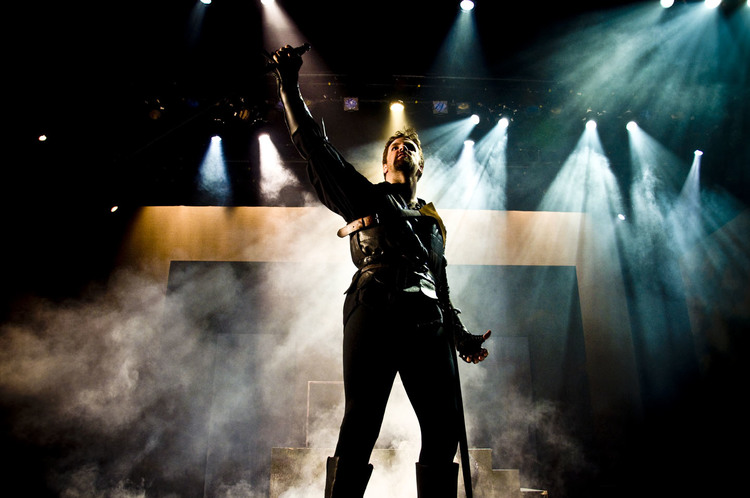 I would like to express my gratitude to Devon Christopher Adams, Stacey Walston and Christian Miller for help in developing this page.

I knew Jared Sakren before I knew him.

Years ago, I was in the audience for several of his performances with the famed Acting Company. He was one of its founding members, along with Kevin Kline, Patti LuPone and many others who have gone on to star in People magazine articles.

I didn’t realize that until he came to Arizona State University from the Alabama Shakespeare Festival. As his work unfolded here, most recently with his artistic leadership of Southwest Shakespeare Company, I realized I had been present at the first blossoming of a very talented artist.

He has come into full bloom with Southwest Shakespeare.  It is not purely the province of the Bard. You can see Uncle Vanya there and Arms and the Man, Our Town and Mrs. Bob Cratchit’s Wild Christmas Binge.

Even Will isn’t allowed to stand on his dignity. The Compleat Works of Wllm Shkspr (Abridged), anyone? Pratfalls at 8.

But at heart, Jared Sakren is a classicist, and he has carved a niche for the great ones, The Tempest, The Taming of the Shrew, Hamlet and Macbeth, Julius Caesar and those Merry Wives of Windsor. His Othello remains one of the most vivid, intellectually challenging productions of that work that I have seen in my years of theater-going.

He has turned the done-to-death A Midsummer Night’s Dream into a magical escapade that ravished the senses with its colorful imagery and cracked the funny bone with its delicious rustics. In still another hoary entry, Romeo and Juliet, he found nuances of character and unexpected humor that caught the interest of audiences who thought they had seen it all.

In the process, he turned Southwest Shakespeare into the most successful classical troupe in the state’s history – and into one of the few such companies nationwide that can claim to be financially thriving, or at least in the neighborhood.

Of course, Southwest Shakespeare Company is not Jared alone. He has hired brilliant designers and talented performers, each of whom have left their mark (Lois K. Myers’ costumes constantly astonished me). In Othello, alone, Ken Love, Maren Maclean and Andres Alcala made indelible memories as the Moor, Desdemona and Iago. In Romeo and Juliet, he took an hitherto-regarded-as-very-competent actress, Laura Durant, and, through her performance as Juliet’s nurse, revealed her as something incandescent.

It would be criminally amiss of me to not mention two other men whose efforts were crucial to the evolution of Southwest Shakespeare. Randy Messersmith and Kevin Dressler were theater renaissance men, actors, directors, teachers and, quite simply, classical aficionados to the core.  In the early-’90s, after a fledgling Shakespeare troupe found the odds of success elusive, they took it over, renamed it the Arizona Shakespeare Festival and laid the foundation for Southwest’s success.

Southwest Shakespeare Company is out to kick the dust off some classic literature in its milestone 20th season.

Rendered into contemporary English, the adaptation is written and performed by Charlie Bethel, a former student of Southwest Shakespeare artistic director Jared Sakren.

The sometimes casual language of the piece is intended “to make it accessible and just plain entertaining, and take the dryness out of it,” Sakren says.

“That’s something that’s always good to do with the classics, to make them as current and immediate for the audience as if it was just written.”

In addition to “greatest hits” such as Macbeth and The Taming of the Shrew, the season features Equivocation, Bill Cain’s provocative 2009 drama that uses Shakespeare to explore the relationship between art and politics. The storyline sees the Bard of Avon commissioned by King James to write a propagandistic play about the 1605 Gunpowder Plot.

The finale will be Fairy Worlds! an adaptation of A Midsummer Night’s Dream performed at the Desert Botanical Garden.

“The visual elements and the interaction with the audience are going to be developed in a substantial way,” Sakeren says. “The audience will feel like they’re immersed in the world of the play.”

In May 2000, a national search brought Jared Sakren to SSC as Artistic Director. He was a member of the first graduating class of the Juilliard Drama Division and a founding member of John Houseman’s The Acting Company, with which he appeared on Broadway, Off-Broadway and on national tours. His background includes teaching, performance and directing credits throughout the nation including the Alabama Shakespeare Festival, Yale School of Drama, American Conservatory, Denver Center Theater Co., Arizona Theatre Company, and more. He is also founding artistic director of Shakespeare Sedona.

For the first 11 seasons, SSC performed the fall and spring shows in the outdoor Mesa Amphitheatre and the winter show indoors at either Mountain View or Westwood High School. The 2005-2006 season opened at the new Mesa Arts Center, a $94.5 million facility located in downtown Mesa. Under Jared Sakren’s leadership, SSC expanded its season and performed a total of five shows in two of its four theaters (the 550-seat Virginia G. Piper Repertory Theater and the 99-seat Anita Cox Farnsworth Studio Theater). 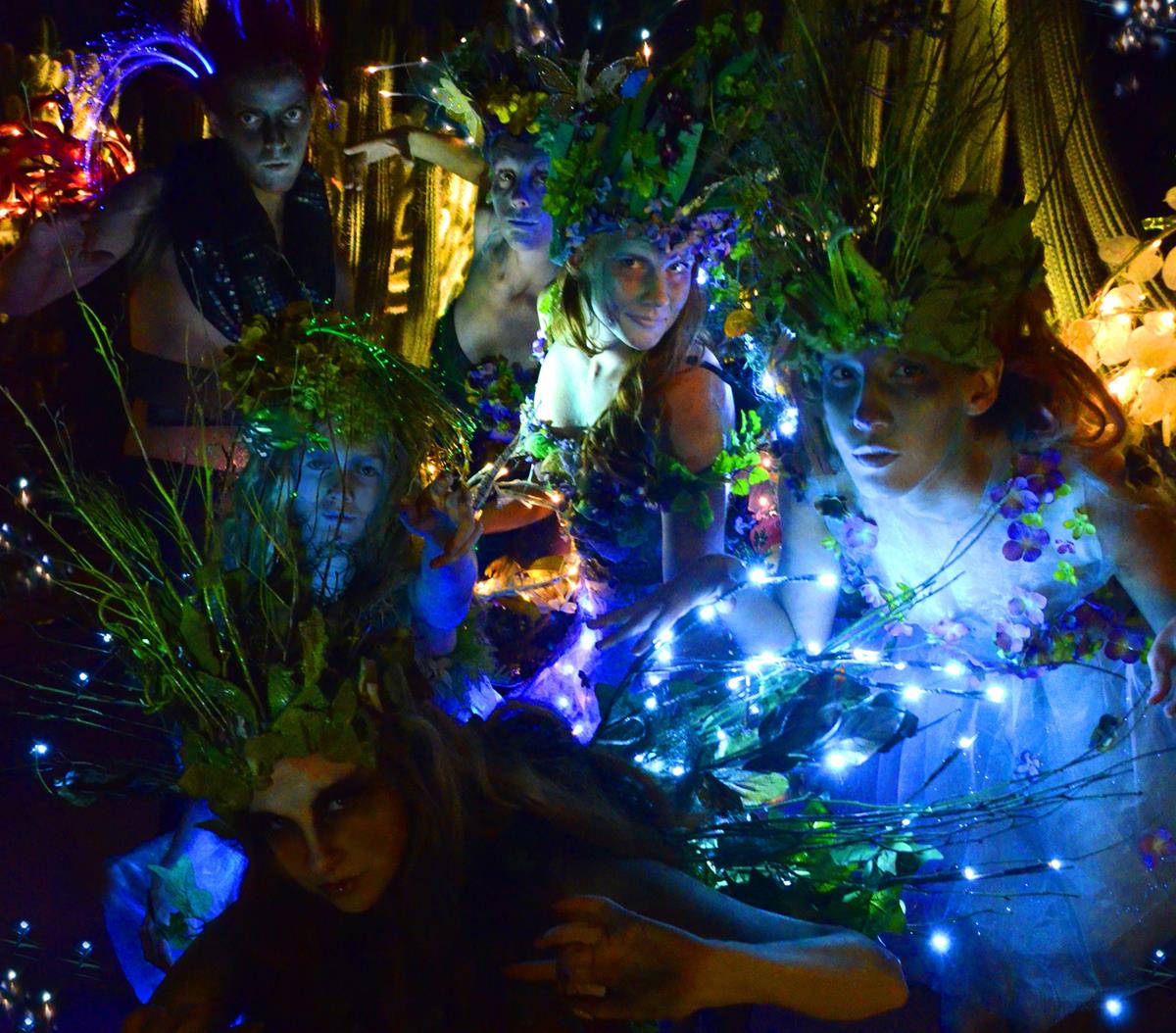 For Kerry Lengel’s report on this production, go HERE

Here’s a magical episode created by Devon Christopher Adams for You Tube. 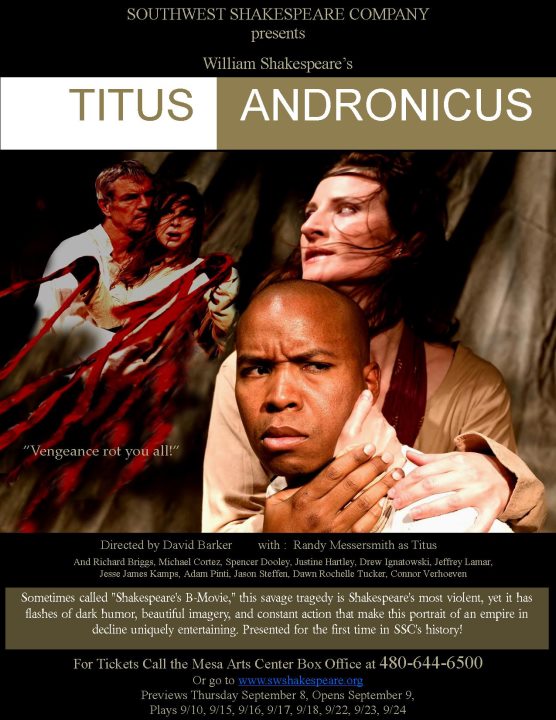 Comments from cast member Diane Nieman Senffner. “Tlaquepaque became Verona, complete with a real balcony … biggest crowds Southwest Shakespeare Sedona had ever had to that point … such amazing memories, like when Philip Herrington fell to his knees to say, ‘I defy you stars,’ and they were all there.'”

Shakespeare Sedona celebrates its fifth exciting season with another summer of classics. Under the artistic direction of Jared Sakren, the company will present The Merry Wives of Windsor and Our Town, July 12th through August 3rd.

Ever since Shakespeare Sedona burst on to the Sedona theatre scene in 1998, it has left an indelible mark in the hearts of local theatre patrons – raising the bar for all local professional theatre to follow.

This year, Shakespeare Sedona is reaching out to all of those in the community who wish to avail themselves of the remarkable Shakespeare Sedona Insitute, by offering a new $900 price for the entire three-week intensive course in professional actor training. This program is taught by some of the most celebrated and renowned teachers in their field in the country, and is open to all area residents.

Shakespeare created the prequel, too!

The lusty and portly knight, Sir John Falstaff, who appears in Merry Wives, as well as a number of other Shakespeare’s plays, was a delight to the Elizabethan audiences. Legend has it that Queen Elizabeth I wanted the ever-popular Falstaff to fall in love. So Shakespeare, bowing to his Queen’s requests and seeking her favor, wrote Merry Wives. This time, the Bard pits the blustery chap against two wily women. The shenanigans begin when Falstaff attempts to woo the women from their money.

In spite of the fact that the character of Falstaff had died in an earlier play, (Henry V), Shakespeare resurrected the comical buffoon just for this appearance. Apparently prequels existed even in Shakespeare’s time!

This is broad comedy that has a sitcom feel to it, and the many of today’s television icons can easily trace their bloodlines to this script. Gene Ganssle, always the crowd pleaser, takes his cue as Falstaff from the comic genius of Jackie Gleason. The antics of Maren Maclean, returning after her acclaimed appearance last season in Othello, and newcomer Andi Watson, are as funny as those of Lucy and Ethel, especially in the scene when they hide Falstaff into a buck basket.

This commercially and critically acclaimed festival began five years ago as a summer program of Verde Valley High School, an independent boarding school in Sedona.

In association with the Arizona Theatre Company and the Sedona Cultural Park, Shakespeare Sedona successfully produced its first three-week season in July of 1998, featuring the hilarious A Comedy of Errors. In addition, Patrick Page’s unforgettable benefit performance of his one man tour-de-force Passion’s Slave, and the mesmerizing Macbeth Project made it clear that Shakespeare Sedona had set a standard for artistic integrity and was a force to be reckoned with.

The following year, the Bard was back with a vengeance. “The Shakespeare Sedona Festival enters its second season with a maturity that would be the envy of its older peers around the country,” proclaimed Kyle Lawson, Arizona Republic arts critic. Scottsdale arts writer Max McQueen referred to the festival as a month-long “Shakespeare lovefest.”

In its second season, the festival opened with Much Ado About Nothing, directed by Sakren, the groups founding artistic director and played for 13 sold-out performances. This production was followed by the magical Midsummer Night’s Dream. The magnificent staging by director Patrick Page reminiscent of a night at Cirque de Soliel – left audiences in awe. The haunting Hamlet Project, starring Page and directed by Greg Leaming, ran concurrently with Midsummer. All productions played to near sell-out houses.

That particular year, a new feature was added to the Shakespeare Sedona season – a free lecture series at the Sedona Public Library. It featured the talents of John Basil of the American Globe Theatre in New York, Greg Leaming of the Long Wharf Theatre Company, and Lisa Wolpe of the award-winning Los Angeles Women’s Shakespeare Company.

Along with its quickly earned theatrical success, Shakespeare Sedona also created the Shakespeare Sedona Institute. The institute is a three-week intensive acting program that concentrates on classical acting and, in particular, acting Shakespeare. The Institute features some of the finest acting faculty from such renown training programs as Yale School of Drama, The Julliard School, Shakespeare and Company, and NYU/Tisch Graduate Acting Program. Along with the summer festival, the Shakespeare Sedona Institute has quickly gained a national reputation as a gem among training programs. In its short history, alumni now include Broadway veterans as well as former members of The Second City Improvisational Theatre.

The festival has also proven to be fertile ground for actors to hone their craft. Shakespeare Sedona alumni Nicole Poole credits her work in last year’s Hamlet Project as being instrumental in her recent casting in Sir Peter Hall’s Tantalus, with the Royal Shakespeare Company. Other alumnae have gone on to perform on Broadway, regional theatre, and on television.

In its 2000 season, Shakespeare Sedona presented the first theatrical show at the new Sedona Cultural Park with A Funny Thing Happened On The Way To The Forum, along with productions of Twelfth Night and Romeo and Juliet presented at Tlaquepaque. In 2001, Shakespeare Sedona presented two productions entirely on-site at the Cultural Park, to full houses and rave reviews, in a new configuration onstage reminiscent of Shakespeare’s Old Globe.

The only drawback was the oft-foul weather of Sedona’s mid-summer monsoons, which should be solved by the move across the street to a comfortable, indoor theatre.

Southwest Shakespeare Company congratulates and thanks its Actors, Designers, Directors, and Artists who, collectively, have received hundreds of award nominations over its 17-year history. Listed below are the winners.

Best Production – Contracted Play
Much Ado About Nothing
2005-06

Get Out: Applauding the Best of Valley Theater in 2005-06

“Jared Sakren and his troupe had a banner year, both financially and artistically, in their debut at the $98 million Mesa Arts Center. The company found a darker edge in “A Midsummer Night’s Dream” and embraced the lighter side of the Bard with a silly “The Compleat Works of Wllm Shkspr (Abridged),” earning new audiences all the while.”

“Sakren left no comedy gag untapped – purple nurple, crotch hits – in this slapsticky staging, even as it took darker turns in the forest. Southwest Shakespeare’s most accessible, wonderful staging to date.”

Best Costume Design – Lois Myers, Much Ado About Nothing

Best Performance, Actor, in a comedy, Honorable Mention
Nicolas Glaeser, Much Ado About Nothing