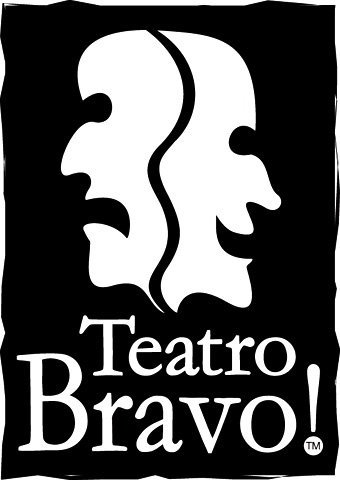 I can never think of Hispanic theater here without seeing a face. Trini Yanez Hale.  An actress, a director, a playwright, a remarkable human being. She is devoted to Spanish language theater but she sees the need to communicate with a larger world. As a result, when I was a working critic, her art was often created in English, but, at heart, it was the culmination of a deep introspection into the Hispanic character. Without intending any offense, I would say she gave local Latino theater its accent. I came away from each of her efforts with the feeling I had walked for a time in her shoes, and that they were feeling comfortable on my feet. She, like the three gentlemen who founded Teatro Bravo, has the gift for making theater universal, something I believe is bestowed on only very great artists.

By the 1990s, Phoenix was already one of the top 10 most populated cities in the country and by the end of the decade the Hispanic population in the city reached 34 percent (U.S. Census Bureau, 2000).

Despite these striking statistics, Phoenix did not have an established theatre company that produced Latino-themed plays even though there were occasional attempts by local Latino artists to stage productions. There were also traveling theatre troupes that brought productions to Phoenix and in some instances, mainstream theatre companies produced a token Latino-themed play.
Motivated by the demographic statistics and the lack of Latino theatrical productions in Phoenix, in the summer of 2000, Guillermo Reyes, Daniel Enrique Pérez and Trino Sandoval, launched the first season of Teatro Bravo, a bilingual theatre company.

The mission of Teatro Bravo would be to produce quality Latino-themed plays in English and Spanish. Teatro Bravo’s goal was to promote the complex portrait of the Latin American populations in the United States and to entertain and enlighten with diverse, unpredictable, sometimes confrontational, but always caring and engaged theatre.

Teatro Bravo wanted to reach audiences to learn about the triumphs and troubles of Latin American culture through theatre. It was also of prime importance to develop and showcase the much needed talents of Latino actors, directors, playwrights, choreographers and designers. The personal and educational backgrounds of the company’s founding members, their community involvement and professional experiences proved to be the perfect combination for a successful launching of Teatro Bravo!

Ricky Araiza is an Arizona based theatre artist and movement specialist. A graduate from Arizona State University with a B.A. in Theatre in 2004, Ricky went on to become an ensemble member of Childsplay Inc., in Tempe, AZ from 2004 to today. In 2009 he decided to challenge himself, and enrolled in a year long study of Physical Ensemble Based Theatre at Dell’Arte International in Blue Lake, California. In 2010, Ricky returned to Phoenix and continues to work as an actor, director and teaching artist throughout the Valley.

From 2010 to 2012, the company was led by interim director Fernando Teson. Under Fernando’s leadership, the company won an AriZoni Award for best performance by an actress, Erica Mathlin for her role in Frida by Ruben Amavizca, as directed by Israel Jimenez. The company was also declared Best Ethnic Theater company by New Times, and the spring 2012 production of Lorca in a Green Dress by Nilo Cruz as the number two production of the season.

As a full-time professor of Phoenix College, Dr. Sandoval also maintains relationships with the Spanish-language press and the Latino community in promoting the theater. He assembled a board of community members, including Cecilia Rosales, former executive director of the Mexican Cultural Center. Teatro Bravo is an extension of his work in community advocacy to promote Latino visibility in the arts. Dr. Sandoval was appointed as Chair of the Department of Foreign Languages in 2003.

Trino, Daniel and Guillermo have written a book, Borders on Stage: Plays Produced by Teatro Bravo. Published in 2008, it is available at most major book outlets. 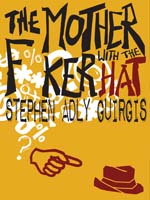 Cejudo who was born in 1987 in Los Angeles to Nelly Rico, an immigrant from Mexico. Abandoned by her husband, Nelly moved her family of six children to various states in her search for employment. Poor but loving and closely-knit, the family eventually settled in Phoenix.

Cejudo attended Maryvale High School and was introduced to wrestling by his brother Angel.  His story of  poverty, guts and triumph against all odds brought him fame at the Beijing Olympics after he took the Gold Medal in freestyle wrestling. Cejudo vaulted from relative obscurity to celebrity, appearing on the Jay Leno Show, Oprah, and other national talk shows.

Guillermo Reyes, director of the MFA Dramatic Writing program at the School of Theatre and Film, commissioned the play in 2011 in his search for meaningful works to commemorate the Arizona centennial.

Reyes asked his graduate student in the dramatic writing program, Jose Zarate, to create the script last year, and the team has been working to create the dramatic rendition of Cejudo’s rise to glory. Cejudo has worked with the ASU creators, and visited rehearsals frequently.

“This is a true story about a local man’s struggle for American identity,” says Reyes. “His story is very much part of the immigrant story of Phoenix, and we wanted to include modern portraits as well as historic works in our celebration of Arizona’s birthday.”

“For this production in 2013,” adds Reyes, “we seek to take the play out into the community, especially now that Teatro Bravo will become a resident company at Black Theatre Troupe’s new space.  Henry Cejudo himself has been training our actors in wrestling skills and it’s been a great honor to have our local Olympian medalist become involved in our process this time around.” 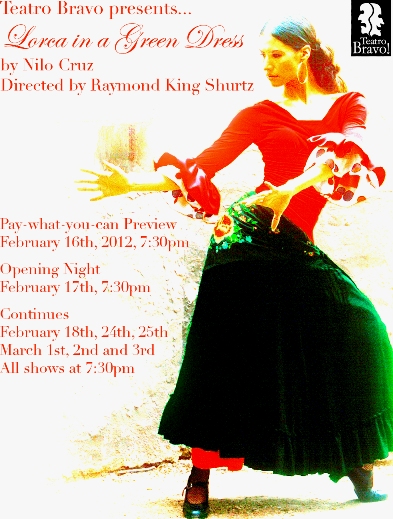 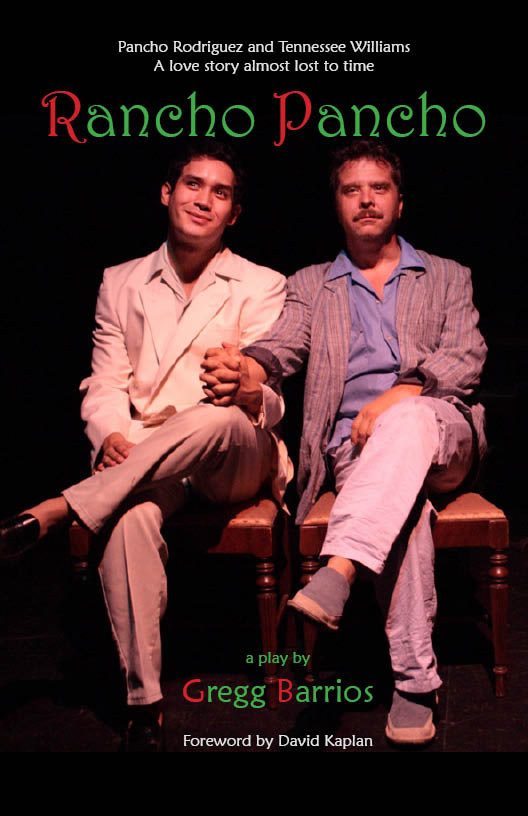 GUILLERMO REYES WRITES OF TEATRO BRAVO AND THE MUMMERS

As I approached middle age, I created Teatro Bravo, with a couple of friends, in Phoenix, Arizona. Age had something to do with it: call it the growing wisdom of a sage, or the middle-aged crisis of a potbellied playwright. I took up running, lost thirty pounds, and went to work on the creation of a theatre company that actually allowed Latino people to be seen onstage, as creative artists. Imagine that. I’m now the fit, trim, and muscular artistic director of Teatro Bravo—and sagacious in a dramaturgical sense as well, but we’ll keep the bragging to a minimum. Let’s just say that hard labor sometimes pays off. (In the American theatre, sometimes it’s also hard to tell why.)

I’m a person first, that’s what I try to tell anyone who cares about the still-living though struggling American theatre; the art follows the person, and out of life’s rhythms the art emerges. The Ethnic Issue, the Latino Issue follows you along, too, along with your genes, like a curse, it seems. I would have, on second thought, created an entirely “unethnic” Teatro Bravo, but the American mainstream mentality doesn’t seem to leave too much room for irony and nuance on this issue. Most of the work I yearned to write or direct would be Latino-themed, so, yes, I opted for a Latino theatre company, a teatro, with a rasquachi bent and minimal bank account to keep things humble. I was reacting to the compartmentalization of the Latino entity in this country. That is, for every mainstream theatre that sees US Latinos as a so-called funding opportunity for that Special Project that brings in extra cash, others see us as a nuisance. Latinos don’t come to our theatre, or we don’t have enough Latino actors in town to do Latino plays. We’ve all heard those lines. In fact, we’ve heard them right here in Arizona, in high places. So my friends and colleagues Trino Sandoval and Daniel Enrique Perez decided that, in Phoenix, with more than a third of its population of the Latino bent, we could actually do Latino-themed plays, and people would come, driving a stake into the heart of those dated assumptions. We built it. They came, to see just about everything. The occasional flop was made up for by genuine hits, including our local renderings of early Culture Clash comedies such as A Bowl of Beings and The Mission; the bitchy, witty Spanish play Entre Mujeres; my own working-class romantic comedy, Miss Consuelo, and my more scandalously sexy Places to Touch Him; a Spanish version of Eve Ensler’s The Vagina Monologues; and a docudrama by ASU playwright alumnus Jose Casas about undocumented workers and the attitudes of people in Arizona about them. We’re here, alive and kicking, and preparing Neruda’s version of Romeo y Julieta. The Bard in Spanish. We can do that, and we do.

Let me stop, therefore, to remember the Mummers. In his book of collected essays, Where I Live, Tennessee Williams reminisces about the Mummers, a St. Louis community theatre that allowed him to write plays in his youth, before he went off on “that Streetcar named success,” which provided him with cash but nearly bankrupted his heart and soul. The theatre was “the open sky” of his youth, and, in these essays, he recalled it with poignancy. Unlike Williams, who could only look back upon youth, I have sought to create Teatro Bravo as my own attempt to cling to youth, to my own open sky, if you will, as I wonder how else to age a little less gracefully and more unpredictably.