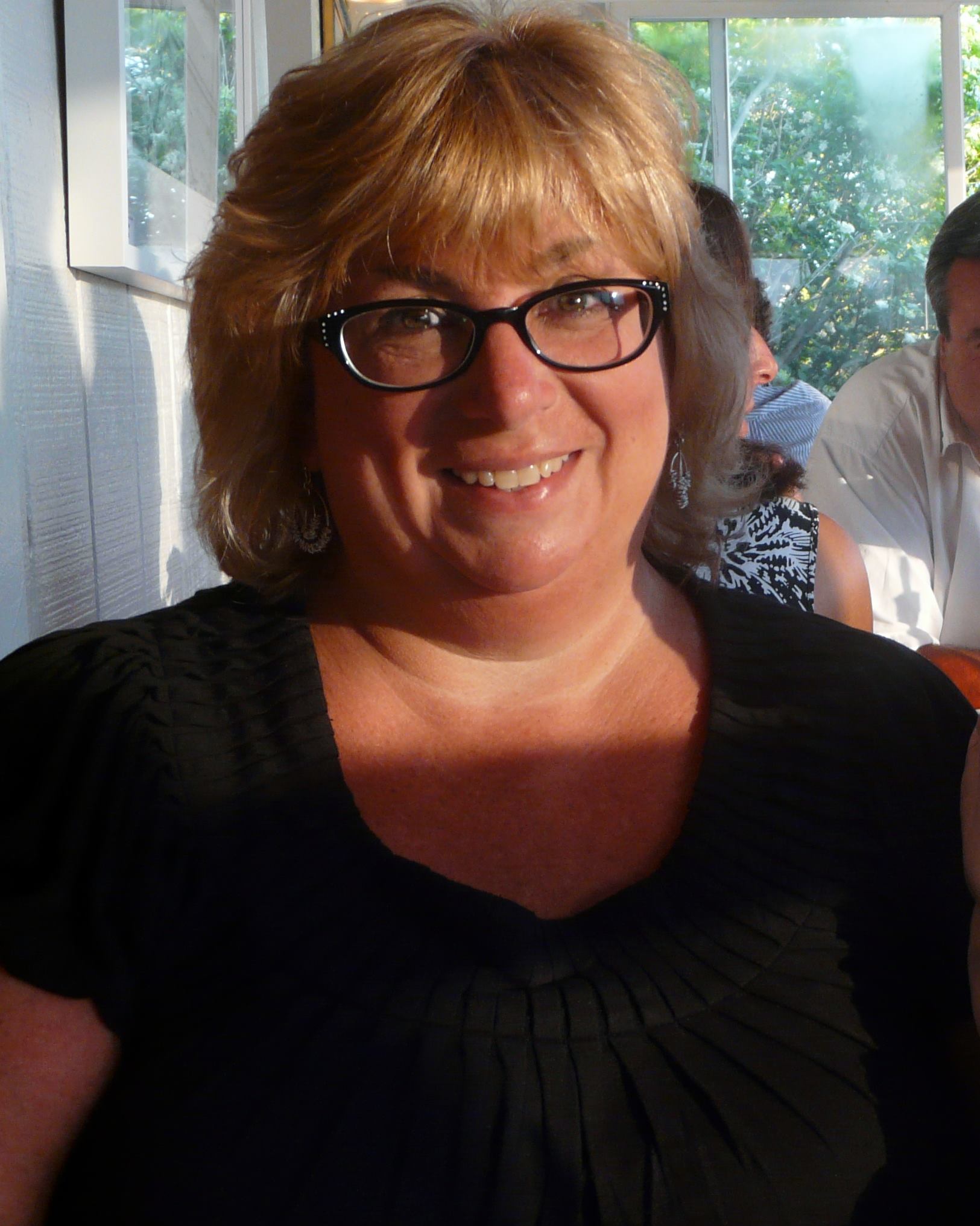 Wendy Leonard has joined our theater history family. She was artistic director of Greasepaint Scottsdale Youtheatre from 1984 to 1999. She now lives in Shaker Heights, Ohio, and is on Facebook. We look forward to sharing her memories of that most excellent theater company for young audiences.

The kids’ after-school whoops faded to whispers when their director took her usual spot at the back of the theater.

“Quiet,” she told them softly. “Everyone needs to get rid of their gum – but not under the seats.”

“Now” she, said, opening her notebook-size script to Pinocchio. “Can we put in all the energy and reactions we talked about? And don’t rush through those hugs.”

Wendy Leonard, a founder of Greasepaint Scottsdale Youtheatre, has given directions like those to dozens of casts of theater-loving kids for 14 years.

Through 120 productions she’s listened for the forbidden rustle of gum wrappers, told kids like Tanner or Heather or Kelsey to squeeze into the light, talk louder, move a little faster.

She’s designed dance steps, hummed the choruses during rehearsals, hung scenery seconds before the curtain went up, soothed parents who bought the wrong kind of shoes for their child actors.

A decade ago she even took the role of Cinderella’s stepsister when the child cast member had a 103-degree fever.

But most of all, she’s clapped louder than anyone.

“I love these kids,” she said.

Still it’s time to move on.

Sunday’s 2 p.m. performance of Pinocchio at the Stagebrush Theatre, 7020 E. Second St., will be the last play Leonard directs for Greasepaint. She will stay on to help produce Greasepaint’s Broadway Review fund-raiser on April 30.

Then she’ll pack up and be gone.

“I didn’t come to this decision easily,” she said.

But at 40, she is hungry for something new.

She isn’t really leaving kids’ theater, because it can’t leave her. Leonard was raised in the children’s theater her father, Jerry Leonard, owned in Cleveland. She directed her first play when she was in the ninth grade.

Now she plans to go to New York City to celebrate her father by turning his 20 original adaptations of favorite childrens’ stories into videotapes for sale.

And she predicts that some of the children who have worked with Greasepaint will follow her to be videotaped in her father’s versions of Tom Sawyer or Cinderella or Alice in Wonderland.

It’s not a hollow boast.

Five of Cheryl and Bob Martin’s six children have been directed and coaxed and encouraged by Leonard.

“We will go wherever she goes,” said Cheryl Martin, one in the valuable cache of volunteer parents who sew costumes, paint scenery, raise money, dole out moral support.

“I have had kids who were turned into donkeys in the chorus and now one who is in the lead.”

Andrew Martin, an engaging 13-year-old, plays Pinocchio, the puppet-turned-real boy. He has had starring roles in an impressive string of plays for Greasepaint and elsewhere.

“Self-confidence, that’s what Wendy has done for my kids,” Martin said, sewing a piece of Velcro onto a skirt amid a cheerful backstage jumble of costumes.

Back at rehearsals one afternoon, Chelsea Cannon, a lively 12-year-old who plays Jiminy Cricket, Pinocchio’s conscience, said she has worked with other directors, but losing Leonard is “like losing family. She was my favorite of them all.”

Kelsey Havens, a poised 13-year-old, the puppet Harlequin in the production, agrees.

So is Bernie Rethore, chairman of Greasepaint’s board of directors.

“I can understand why she is going,” he said. “If Wendy got run over by a bus, her father’s wonderful stories would get lost.”

Leonard has staged many of those stories since she came to Scottsdale after her father’s death in 1980.

After he died, Leonard’s family came to Scottsdale to connect with other relatives.

“Our whole lives turned upside down (after his death),” she said.

She filled in the gaps in her life by studying elementary education. She worked in an extended day-care program, always knowing that she would return to children’s theater.

“When we first starting organizing, we built sets in driveways and rented high school and elementary auditoriums,” she said.

Greasepaint’s marquee year was 1995, when its award-winning Peter Pan production moved from the Stagebrush, capacity 209, to the Scottsdale Center for the Arts, playing for the first time before an audience of 700 or so.

“That was wonderful,” Leonard said.

Leonard always longed for more sweeping productions. Rethore promises there will be.

He says close attention to the bottom line and heartier financial support over the past two years will mean “a new repertoire of shows, bigger and more elaborate than we’ve ever done.”

Leonard won’t be replaced with a single director, but with an array of several from Valley community theater.

“The arts in Phoenix has grown in the last 10 years, and there is a proliferation of wonderful talent that has come to the Valley,” Rethore said.

“We will try to expose these kids to a bunch of different faces.”

For now, though, Leonard is still in charge, tucked as always behind the scenes.

“She is not like some directors,” Cheryl Martin said. “She never comes out and takes a bow. She is too humble.”

Leonard has never thought of joining the cast on the stage after the last act.

Everybody hates to see Wendy Leonard leave Greasepaint Scottsdale Youtheatre, but no one can say they didn’t send her off with a bang. A farewell gala raised more than $13,000 for the children’s troupe.

During the evening, 50 members from past Greasepaint productions returned to perform a Broadway revue in Leonard’s honor – bringing a tear to the lady’s eye and the crowd to its feet.

Leonard retired as founding artistic director after 14 years with the company. She will be replaced by T.J. Weltzien, a member of the artistic team at Scottsdale Community Players, which shares the city’s Stagebrush Theatre facility with Greasepaint.

He currently is executive producer and technical director for the Players.

Greasepaint also named Larry Loeber as its business manager. Loeber, who has served as Greasepaint’s musical director for the past 10 years, is a graduate of Case Western and Ohio State universities. A market analyst, he was formerly employed by Battelle Memorial Institute as a translator and analyst of foreign science journals.

Weltzien is off to a running start, planning Greasepaint’s summer season. It kicks off June 4 with Joseph and the Amazing Technicolor Dreamcoat and continues with The Magical Pied Piper (June 25), The Three Little Pigs Go West (July 16), Oklahoma! (July 23) and King Midas and the Palace of Gold (Aug. 6).

These clippings are from Wendy’s early career with the Heights Youth Theatre, the Cleveland, Ohio, company of her father, Jerry Leonard. 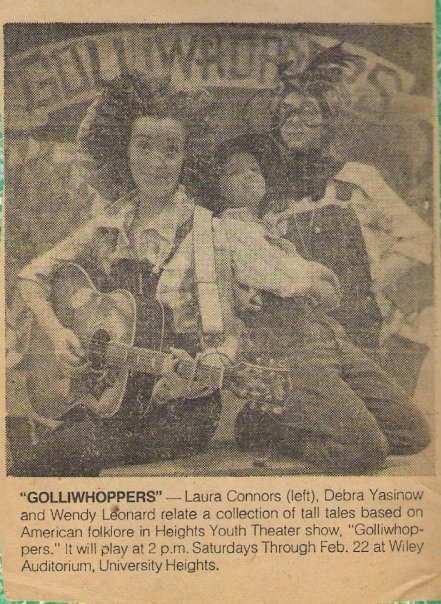 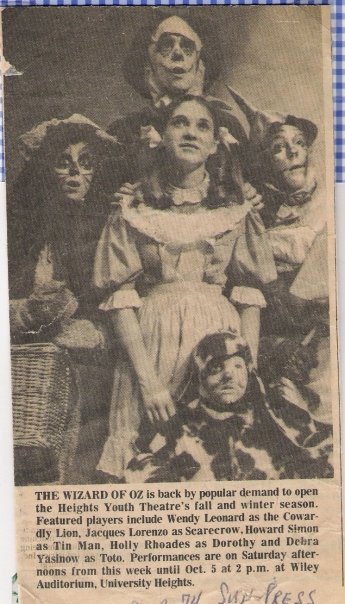